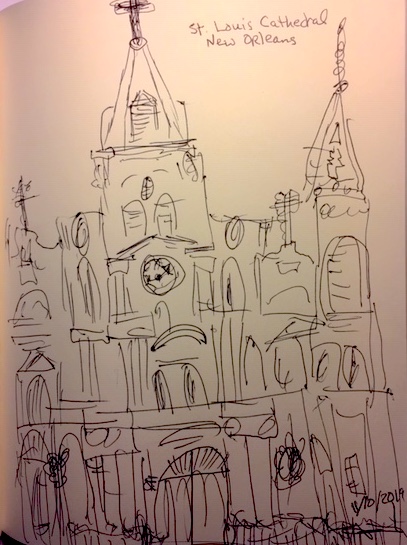 A long time since its construction and centuries longer since its namesake reigned,

its triple steeples still rise above the square, dappled by the morning sun

if they took a day off line up for their morning pastries and au lait,

and already outside the commotion is building, the music of the spheres

a little off key, its brassy tune clashing with the brash shouts of hucksters

out for the early mark, but as I pass through and the doors swing close

behind me, the sacred silence engulfs me, and it is indeed as if I have

crossed into the otherworld, despite the electrical wires announcing that

the church serves as current place of worship, not historical relic only,

and the plaques and boxes and racked brochures for sale

reminding all that not even here does commerce cease, and though

I’m not Catholic, I too give in—drop coins in the box and light

a candle in hope of some little glow of enlightenment, and Louis

would have presumed me innocent until his branch of the Inquisition

made its inquiries and determined otherwise, and would probably

out front, or had his minions do it for him, more likely. Still, as far

as medieval rulers go, he was at least less awful than his peers, and,

if we can trust the words of his friend and confidante Jean de Joinville,

a positive influence on law and religion, famous for his

charitable disposition and his possession of a fragment—

an expensive one at that—of Christ’s True Cross.  These days,

still amid the cool white stones of its monuments, one can, for a fleeting

moment, feel the circulation of saints and spirits along the aisles

and ambulatories under  the tent of colonial-colored banners.

At 6 a.m. on a Wednesday, New Orleans is stretching

and waking up slowly, a solitary barge drifting lazily by

on the lazy river as the bloody-egg-yolk sun peeks

out red-eyed and bleary from its cloud-blankets;

the streetcars on Canal stand idling, blinking their eyes,

on Magazine, a bus sits waiting at the curb,

a garbage truck lumbers down an alley.

In half an hour, one runner, one cyclist,

the first pedestrians venturing out,

haphazardly clothed as if they dressed in the dark.

Now, the sun brightens, and the ripples

on the surface of the water glitter like diamonds,

or, well, rhinestones at least; shadows from

A timeless scene, but a cable hanging loosely

outside my 36th-floor room swings in the wind

a reminder that the hours keep ticking forward.

Because the airport shuttle comes early,

and I don’t get ready fast, I hold

back my arm from Snooze this once

and drag myself from the covers at five

in this city that sleeps until noon.

Last night, as I kept company with friends,

the jazzmen played with soul for us,

Time now too short for strolling

to Café du Monde, I brew

a cup from a packet of something

of something the hotel has

mislabeled coffee and sip it

with a saved beignet, cold, hardening,

And I look first out the window

at the upper floors and palm tops on Canal,

glimpsing then, in the dresser mirror,

the other direction’s view, of the few dim l

Quarter, in a landscape running toward

the River, but distantly and in reverse.

A bit later, in the soft-aired Southern dawn,

the bus loops through French names and wrought-iron

from exile to reality, and at the east end

of the Quarter, outside a bar shuttered

against this lonely hour, sits a cute gay boy,

dark-haired and fresh-faced, in a green

and talking on his phone with a slightly

goofy grin, the future in the present,

supported by the past, his times

way different but his hopes about

the same as those of the many like him

who’ve come to walk these streets,

killing one life off, seeing rebirth into another.

Even in New Orleans, where anything goes,

in the Seventies, when being out,

for most, remains completely out of the question,

a difficult life in and around the Big Easy.

For city dwellers and suburbanites

taking buses from Kenner and Metairie

and places even farther out than that,

for rural guys in need of a night on the town,

Upstairs Lounge the place to be themselves,

in the Quarter on a seedy stretch of Iberville Street,

For those men of necessity closeted,

Excuses made to parents, kids, even spouses—

“Got to run an errand, help a friend,

take care of business, go to a thing for work”—

they arrive in singles, couples, groups

queens and all the rest, a happy refuge

from discrimination and from hate,

a place to meet, relax, drink and dance.

“Look who he’s with, what she is wearing”—

and “nellie-drama,” always so much fun.

white shoes with platform heels, or down with jeans,

Listening to “You’re So Vain” with snide jabs at friends,–

“Sweetie, this song is really about you”—

singing along with Elton to “Crocodile Rock,”
dancing to the Four Tops’ “Ain’t No Woman

(Like the One I Got),” not missing the irony.

everyone buzzed, some a little too drunk—

“It’s Friday, go ahead and have another”—

everything hazy from the cigarette smoke.

But then some conflict over who knows what

A raging-mad customer gets himself kicked out,

vows vengeance on whoever’s perceived to have wronged him—

“I’ll show you all, burn down this fucking place”—

goes down the street, buys a can of lighter fluid.

When the door buzzer sounds and will not stop—

“Somebody go see what the hell is wrong”—

door’s opened and a ball of fire shoots in;

the updraft takes it fast—“Oh my God!”

Quick-thinking barkeep leads a few out back—

some manage to squeeze themselves through barred windows,

but the place is packed, and  many unlucky men

stuck inside die screaming in the flames,

some fused together in desperate embrace,

determined to spend eternity together,

some alone now at their hour of death,

even a reverend minister among them.

Because the dead are queer, there’s little interest;

no churches want to host the funerals.

has been called a massacre of gays,

though survivors say history should omit it.

Perhaps a hate crime before the term was current,

but if, in fact, an evicted patron did it,

that means the hate in question was internal.

And legend has it the arsonist confessed,

though legal evidence could never be assembled.

But there’s no uncertainty about the horror

of thirty-two people dead, most of their

bodies burnt past  recognition in

a hell not imagined like Dante’s, but all too real,

regardless of which devil fanned the flames.

Note: The facts on which this poem is based come from an article in the 1 July 2013 issue of Time.  “The Horror Upstairs” was written by Elizabeth Dias with Jim Downs.  I have, however, invented a number of fictional details.